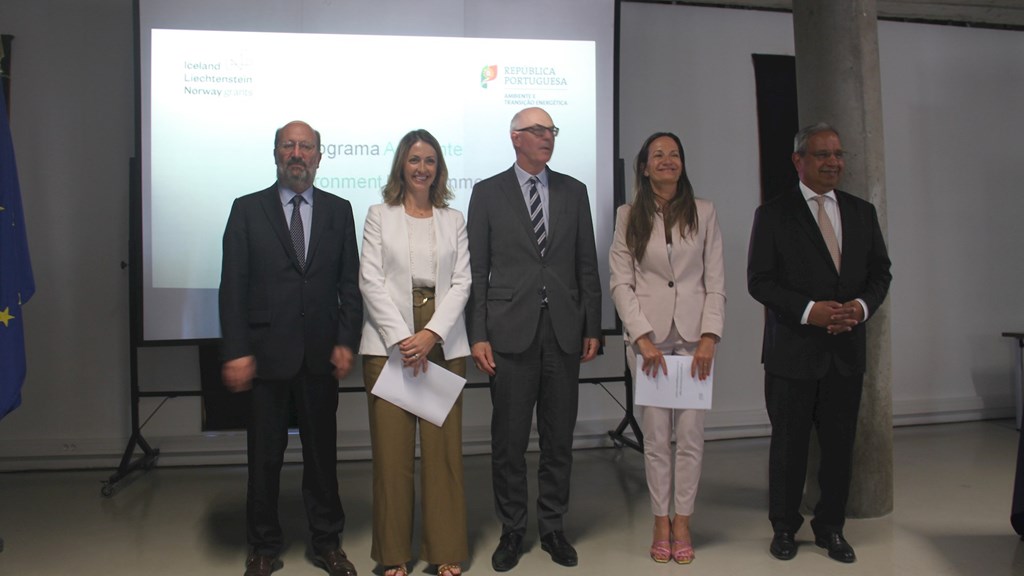 The Programme Environment, Climate Change and Low Carbon Economy, funded by the European Economic Area Financial Mechanism - EEA Grants 2014-2021, presented on May 29 at the Auditorium of the Directorate-General for Territory.

The ‘Environment Programme’ was launched today in the presence of the Minister of Environment and Minister of Planning, João Pedro Matos Fernandes and Nelson de Souza, the Norwegian Ambassador to Portugal, Anders Erdal, the Head Coordinator of the National Management Unit, Susana Ramos and the Secretary General for Environment and Energy Transition, Alexandra Carvalho.

About 28 million euros are available for the Programme Environment. 24 million from the EEA Grants and the remaining from National Budget. For the promotion of Circular Economy and Decarbonisation, the funding will be of 12 million euros each and for Territory Valorisation there are 2 million euros available.

For ​​the Circular Economy area, four open Calls will be launched this year: a system of deposit - return of plastic bottles, two in the ​​Circular Economy for the construction sector, and one for the reduction of plastics in the sea. For Territory Valorisation, the funding will be applied in sustainability programs for the 11 biosphere reserves in Portugal. In the area of Decarbonization, will be financed "living labs for low carbon and mitigation of climate changes in municipalities with more than 200 thousand inhabitants”. The municipalities such as Lisboa, Sintra, Vila Nova de Gaia, Porto, Cascais and Loures are the main beneficiaries.

The Programme also includes three pre-defined projects, such as the development of a framework for deposit / return systems, the assessment of territorial vulnerabilities regarding climate change and the restoration of the structures of Ceira’s river to the reduction of vulnerabilities and regularization of river flow, only with "natural engineering", as referred by the Minister for the Environment.

During the event, National Management Unit, as National Focal Point, and the Programme Operator, the Secretary General for Environment and Energy Transition signed the Programme Implementation Agreement.