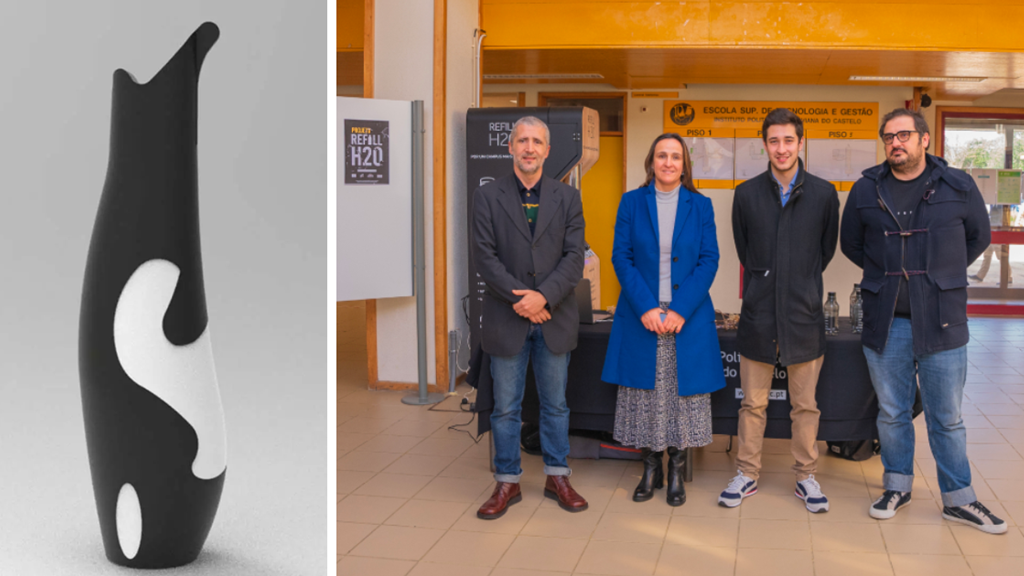 The orca-shaped bottle project, developed by João Mendes, former student of the Integrated Design Master's course of the School of Technology and Management (ESTG) of the Polytechnic Institute of Viana do Castelo (IPVC), won the international Green Product Award, in the consumer goods category. The award is delivered in a ceremony in Munich, Germany, next May 18th.

"I wasn't expecting it at all and when I saw the email I was very happy. When you're not expecting it, that's when it feels better," confesses João Mendes, quoted in a statement from the IPVC, noting that he signed up "without great expectations of winning since it is an international competition. What is certain is that the orca-shaped bottle developed under the Refill H2O project won one of the categories of this international award.

The bottle that won the international competition visually transmits the idea of an orca, "because it is one of the marine animals that suffers most from ocean pollution, especially due to the excess of existing plastic," explains the student. João Mendes highlights the suffering of this marine animal for the basis and concept in the development of the prototype bottle. The designer leaves the alert: "the shape of the bottle intends to raise awareness about the consequences that the excess of plastic in the ocean does for example in these marine animals, which are not reproducing and that can lead, very soon, to their extinction". Changing habits and the way we live and think about what is around us is the main goal of this project, which had the mentorship of ESTG-IPVC professors Ana Curralo and Sérgio Lopes.

"Maybe the award will sensitize investors to invest in the bottle and we can implement this second bottle of the project in the Polytechnic of Viana do Castelo", appeals João Mendes, praising the fact that the Smartbottle Refill_H20 is now "a product of international value". This award is also, in the words of the former student, "one more proof of the good work that is done in the Polytechnic of Viana do Castelo and in the course in particular". João Mendes now hopes "to find partners to invest in the production of the bottle molds, which are very expensive and specific.

Also in the scope of the Green Product Award, the intelligent bottle, created by João Mendes, got 6th place in the public award. For the first time in the history of the Award, the results of the public vote were announced before the final winners' ceremony, as a thank you for the record 52,000 votes in six weeks for the 100 green products and concepts nominated Green Product & Green Concept Audience Award 2022.