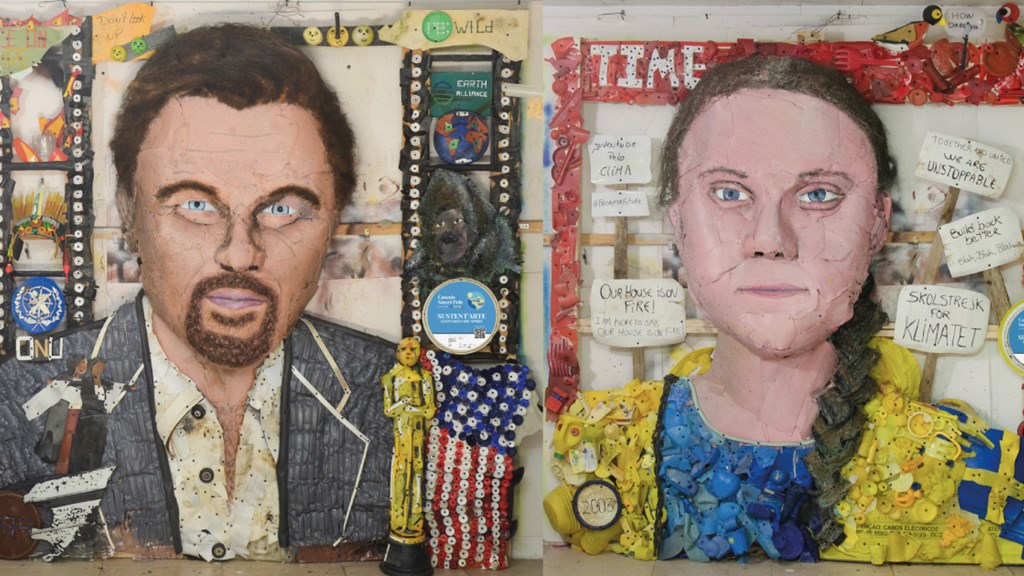 You can now visit two more pieces of Sustent'Arte at Nova SBE, an initiative that transforms waste collected from the sea and beaches into art.

The Cascais Smart Pole by Nova SBE project is an urban living-lab experimentation space, in which everyone's interaction and participation will allow us to move towards carbon neutrality.
The project is funded by the Environment, Climate Change and Low Carbon Economy Program of the EEA Grants (under the contest Implementation of pilot projects of living labs for decarbonization and mitigation of climate change).
It comprises several activities and last June Sustent'Arte was inaugurated, a climate roadmap that transforms waste collected at sea and beaches into art, portraying some of the heroes who give voice to the fight against climate change.

The goal of this initiative is to demonstrate that artivism is a tool that gives voice to artists who find in art the power of messages and reach out to people
inspiring change. It is a cultural manifestation, and culture is also one of the pillars of sustainable development.

Sustent'Arte is developed by Mar de Experiências and will portray 6 personalities worldwide recognized for their active role in fighting climate change.
The pieces in this itinerary are created with waste collected from the beach and the banks of rivers and forests.
The third urban art piece features Swedish environmental activist, Greta Thunberg, who is known for challenging world leaders to take immediate action on climate change mitigation (the two pieces already on display at Nova SBE depict David Attenborough and Jane Goodall).
Greta Thunberg's activism began when she persuaded her parents to adopt lifestyle choices that reduced their own carbon footprint. In August 2018, at the age of 15, she began spending her Fridays outside the
Swedish Parliament to call for stronger action on climate change, holding a sign that read Skolstrejk för klimatet [School strike for climate]. Thunberg has been noticed for his youthfulness and for his direct and frank way of speaking both in public and to political leaders and assemblies, in which he criticizes world leaders for not taking what he considers to be sufficient action to address the climate crisis.

Her influence on the world stage has been described by The Guardian and other newspapers as the "Greta effect." She has received numerous honors and awards, including an honorary fellowship from the Royal Scottish Geographical Society, inclusion in Time Magazine's 100 most influential people in the world, inclusion in the Forbes list of the World's 100 Most Powerful Women, and nominations for the Nobel Peace Prize in 2019, 2020, and 2021.
Sustent'Arte's "Greta Thunberg" piece is a montage inspired by several photographs, with the face, braid, and yellow coat being representative of the activist. The red frame symbolizes the moment when she was recognized as one of the 100 most influential people in the world by Time magazine. On the posters we can find some of her most emblematic phrases: "Build back better. Blah, blah, blah"; "Our house is on fire. I am here to say, our house is on fire."; "Together and united, we are unstoppable."; "How dare you?" The two birds with a small sign represent the struggle to preserve the planet, to fight climate change, and to protect biodiversity.
The climate strikes are represented by the phrases "SKOLSTREJK FOR KLIMATET", "#FRIDAYSFORFUTURE" and "YOUTH FOR THE CLIMATE" The fourth urban art piece features the American actor, producer and philanthropist, Leonardo DiCaprio. Recognized for his work as an actor, he has been the recipient of numerous awards, including an Oscar in 2016, a British Academy Film Award and three Golden Globes. In Sustent'Arte, Leonardo DiCaprio is portrayed for his dedication to the environmental cause. In 1988 when Leonardo diCaprio was very young, at the age of 22, he created the Leonardo DiCaprio Foundation whose mission is to contribute
to a long-term harmonious relationship between man and the natural world through collaborative partnerships and by supporting innovative projects that protect wildlife and restore balance to endangered ecosystems and communities. The Foundation works in key areas such as climate change, ocean conservation and biodiversity protection. Leonardo DiCaprio was appointed in 2014 as the United Nations Messenger of Peace for
climate change and has been a leading figure spreading the message to world leaders, business and civil society about the importance of climate action
joint climate action.

There are countless initiatives, recognitions, fundraisers, projects, aid, donations, lectures, documentaries in which Leonardo DiCaprio is involved.
Sustent'Arte's "Leonardo DiCaprio" piece was inspired by a photograph by John Russo for National Geographic. The installation depicts several elements linked to environmental protection and his contribution to the fight against climate change and the protection of biodiversity: United Nations symbol representing the Messenger of Peace status he was awarded in 2014; Indigenous adornment representing DiCaprio's commitment to the defense of the Amazon and indigenous peoples; "Ice on fire" one of the documentaries produced and narrated by the actor that explores how the world is feeling the effects of climate change while examining the need to reduce carbon emissions; Re: Wild, the environmental organization of which he is one of the founders; Earth Alliance, an organization founded by DiCaprio whose goal is to "address the urgent threats to our planet's life support systems"; Gorilla stands for "Virunga," the documentary about endangered gorillas that the activist produced for Netflix; "Don't Look up" a 2021 comedy and political satire film written, co-produced, and directed by Adam McKay.
The film is a satire of governmental, political, celebrity, and media indifference to the climate crisis.
The installation is also decorated with elements alluding to his acting career: the Oscar he won in 2016 with his participation in "The Revenant," and a representation of Titanic, one of the most iconic films of his life (1997), directed by James Cameron.
Until the end of the year will be presented 2 more personalities that can be visited at Nova SBE's Carcavelos campus.