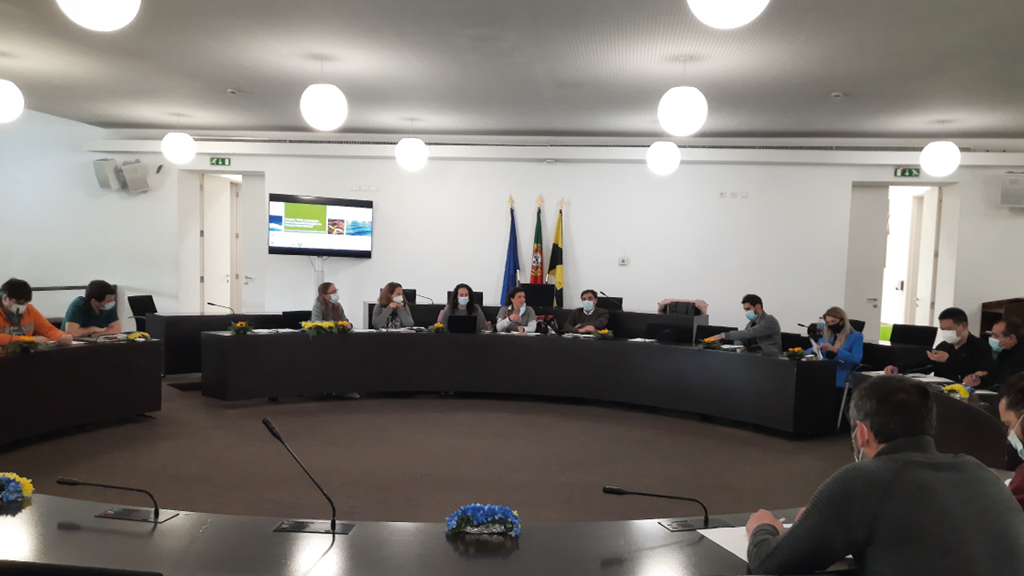 The meeting took place at the Auditorium of the Adão Barata Park Building (PAB) in Loures. It is the first of a series of dynamic sessions with this Working Group, in the scope of the PAB_LivingLab – Vive a Descarbonização no Parque Adão Barata project.

On March 10th, the first meeting of the Working Group that will collaborate with the PAB_LivingLab project took place in the Auditorium of the Adão Barata Park Building in Loures. It will aim to build a guide of good practices related to themes that range from water consumption, well-being, local development, energy, climate, ethical issues, air quality, waste, land use while reflecting on the direct or indirect impact that the various forms of consumption may have in environmental, economic, and social terms.

The shopkeepers presented several concerns associated with the lack of alternatives to waste management based on ecological and sustainable principles and continued identifying practices already adopted concerning water consumption, food waste, and the nature of the sold products. Regarding this last point, all of them confessed to deliberately opting to consume local and regional products in a conscious and revealing attitude of concern for the national economy and the country's sustainability. Food waste is, for all traders, a reason for apprehension. For this reason, they try to trace efficient and permanent management of the kitchen using, if necessary, app or Organizations whose mission is to avoid food waste. The energy issue was also a concern across all traders, who consider it advantageous to install photovoltaic systems that do not require fossil fuels to generate energy.

During the meeting, each shopkeeper shared the practices already put into effect in their establishments about sustainable production and consumption. Then, they discussed the pros and cons of those options, depending on their financial impact, the behaviours and specificities that characterize the target audience that frequents these spaces.

At the end of this first session with representatives of local businesses, the establishment of measurable objectives and targets on sustainable purchasing is planned, leading to two main results. The first one involves the creation of an action plan to enable more efficient waste management. In contrast, the second involves a regular garbage collection, along with the distribution of a survey on sustainable purchasing, which each establishment should disseminate to their customers.

The first of four sessions involving the Working Group composed of the local shopkeepers that exercise activity in the Adão Barata Park, in Loures. This activity has been extended until May 2022

It is an initiative framed within one of the activities planned in the scope of the PAB_LivingLab project, which seeks to promote reflection and gather contributions that will allow us to assess how the events held at the PAB can take place in compliance with a set of sustainability principles that safeguard the environment and public health of present and future generations.

PAB_LivingLab – Vive a descarbonização no Parque Adão Barata (PAB_LivingLab – Experiencing decarbonization in Adão Barata Park) is a project that runs from May 1, 2021 to April 30, 2024, financed by the Environment Program of the EEA Grants, whose promoting entity is AIDGLOBAL – Ação e Integração para o Desenvolvimento Global (AIDGLOBAL – Action and Integration for Global Development)–, and as partners the Municipality of Loures, the Instituto Superior Técnico of the University of Lisbon, bim+, dstsolar and Innovation Point.