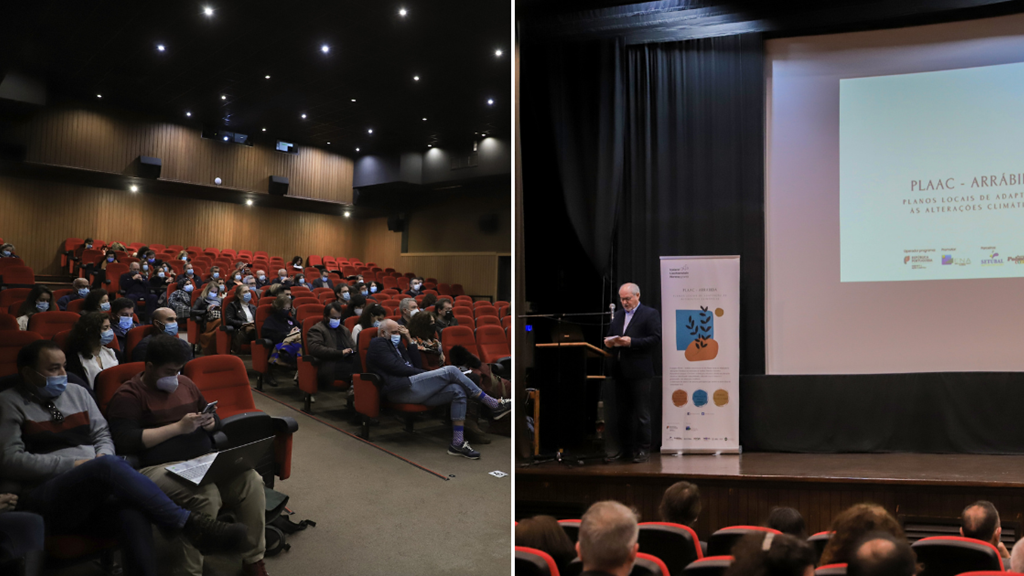 The main climate hazards that may affect the municipalities of Setúbal, Palmela and Sesimbra until the end of the century were presented by the partners of the PLAAC - Arrábida project to the managers of several areas of these municipalities in a session aimed at their involvement in the construction of the Local Plans for Adaptation to Climate Change.

The session, held on March 9 at Cinema Charlot - Municipal Auditorium, in Setúbal, was attended by fifty participants, including mayors, managers and technicians of the three municipalities that are developing the PLAAC in partnership with ENA - Environment and Energy Agency of Arrábida, the project promoter, IGOT - Institute of Geography and Spatial Planning of the University of Lisbon and the NOVA School of Science and Technology (FCT, NOVA University Lisbon).

During this session, the results of a study carried out by IGOT within the scope of the PLAAC - Arrábida project on the current and future climate hazards in the municipalities of Setúbal, Palmela and Sesimbra were disclosed, according to two different scenarios for climate change until the year 2100, in which one presents more favourable conditions (RCP 4.5) and the other reveals more unfavourable conditions (RCP 8.5).

The study, presented by University of Lisbon professor José Luís Zêzere, analyses the climate hazards that these municipalities have to face from the rise in sea level (estuarine flooding, coastal flooding and overflowing, coastal erosion and retreat of cliffs), temperature (increase in the number of days the population is exposed to excessive heat and increased conditions for forest fires), precipitation (river flooding from flash floods, soil erosion, slope instability and increasingly chronic meteorological drought) and wind (windstorms).

As part of the PLAAC - Arrábida project, this study provides the basis for the identification of adaptation measures to be developed in order to prepare the municipalities of Setúbal, Palmela and Sesimbra to face the challenges of climate change.

Opening the session, the Mayor of Setúbal, André Martins, said that climate action is one of the priorities of the municipality and underlined the importance of PLAAC-Arrábida as an example of working in partnership to prepare the territory to face climate change and the new Climate Law, which came into force on February 1st and establishes that all municipalities have until the end of 2023 to approve their municipal climate action plans.

The session with municipal leaders also addressed the strategic importance of the PLAAC project. According to ENA's Executive Director, Cristina Daniel, the access to certain funding for climate change measures increasingly requires municipalities to have action plans in place.

José Carlos Ferreira, from FCT-NOVA underlined the importance of the integration of PLAAC results in the territorial management instruments of each municipality, as well as the process of co-creation of Local Adaptation Plans that the project develops through the constitution and consolidation of the Local Climate Change Adaptation Network. This Network integrates a set of awareness and capacity building activities for municipal technicians, the local community and actors with strategic relevance in the territory.

At the end of the session, Sérgio Marcelino, president of ENA's Board of Directors, highlighted the relevance of the PLAAC project for the future of the territory of Arrábida and its populations facing climate change.

PLAAC-Arrábida, which aims to contribute to increasing the resilience and responsiveness of the municipalities of the Arrábida territory, materializes an investment of over 165 thousand euros, funded 90 percent by the Environment, Climate Change and Low Carbon Economy Programme, of the Financial Mechanism EEA Grants 2014-2021.