Signing of the consignment notice for the Rio Ceira Rehabilitation contract 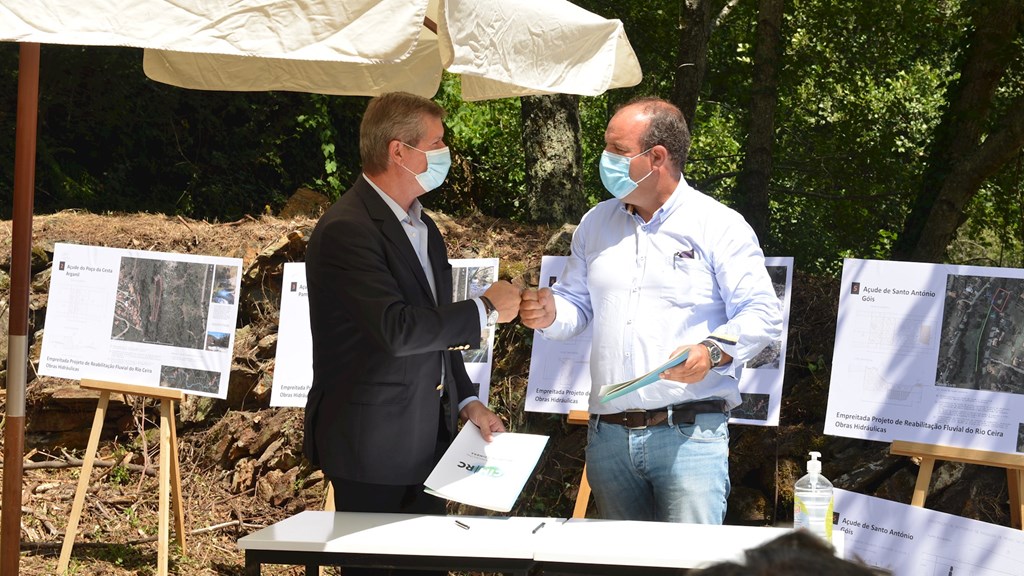 The signing of the consignment document for the contract for the Rio Ceira Rehabilitation Project – Hydraulic Works, in Casal Novo, municipality of Arganil, took place on August 11th.

The ceremony was promoted by the Municipality of Arganil, in collaboration with the CIM Region of Coimbra, and was attended by the vice-president of the board of directors of the APA, Pimenta Machado.

The project in question is promoted by the Intermunicipal Community (CIM) of the Region of Coimbra by delegation of powers from the Municipalities of Arganil, Góis, Lousã and Pampilhosa da Serra and aims to carry out river rehabilitation projects, considered in the project "Management of the Basin of the Rio Ceira adapted to Climate Change", promoted by the Portuguese Environment Agency, through the Administration of the Hydrographic Region of the Center, and with the Faculty of Engineering of the University of Porto and the Norwegian Directorate of Civil Protection, and financed by the EEA Grants Program (Financial Mechanism of the European Economic Area).

The execution of the work, awarded to the company Penelaterraplanagens - Desaterros e Terraplanagens, Lda. for €92,144.30 (plus VAT at the legal rate in force), and with a total execution period of 150 days, will be supervised by the company TUU and provides for intervention in the Quinta da Mata and Foz do Choroso weirs, Pampilhosa da Serra; in the weir of Vale Pardieiro, Pampilhosa da Serra and Arganil; in the weir of Poço da Cesta, Arganil; weirs of Santo António, Góis and in the weirs of Cabril do Ceira, Amiais and Barrabás in Lousã.

These interventions, whose project was carried out by the Faculty of Engineering of the University of Porto, are carried out from a sustainability perspective and with the aim of improving the management of their flow for different purposes and in different situations, from drought and/or drought situations. to great floods. This objective is of relevance in the context of mitigating the effect of climate change, as it is expected that the frequency of extreme hydrological phenomena occurring in this territory will increase. In addition to repairing the weirs, work will be carried out to re-profile the bed and banks and, in the case of the Santo António weir, a device for the passage of fish will be built.

The Rio Ceira Basin Management Strategy, carried out in cooperation with the Portuguese Environment Agency, municipalities and CIM Region of Coimbra, will contribute to the ordering and protection of natural and heritage resources, in a logic of safeguarding them, namely protection against fires, erosion of slopes and floods, and accompany measures implemented and being implemented in the region to improve the conditions to support the development of endogenous potential, such as setting up a more efficient system for registration, information and monitoring of resources and promotion actions tourism, through the installation of equipment and services necessary for the enjoyment of natural spaces and landscapes and for the interpretation and visitation of cultural heritage, enhancing the region's endogenous wealth and contributing to the creation of employment and settlement of the population.