Junta de Benfica launches Project no! with webinar on violence against women 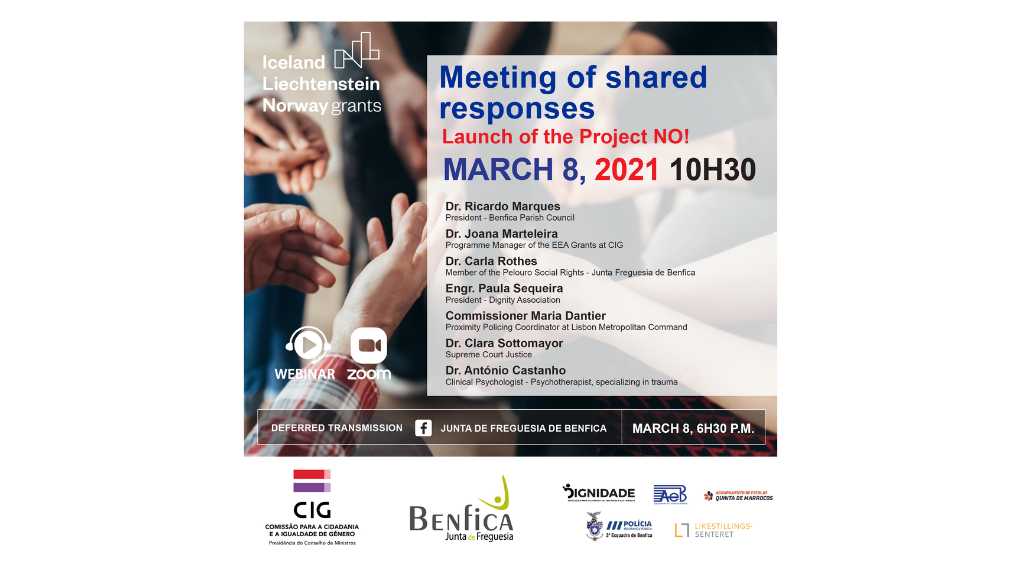 On March 8, the NO! Project is launched through the webinar "Shared Response Meeting"

Prevent violence against women and domestic violence by promoting a culture of non-violence and training professionals in this area of ​​prevention. This is the objective of Project NO! financed by EEA Grants, under the Conciliation and Gender Equality Program, operated by CIG.

This initiative of the Benfica Parish Council, which will take advantage of International Women's Day, March 8, for its launch. Thus, next Monday, at 10:30 am, the webinar “Meeting of shared responses”, which can be watched via zoom (https://zoom.us/j/9355654398?pwd=MlZkV3JqRDllWDRIQVRxSWlicEtCZz09).

For Ricardo Marques, President of the Benfica Parish Council, this project “integrates the objective of making Benfica an increasingly inclusive parish, where people feel and are treated equally, regardless of gender, color or race”. And he adds: “Project NO! bets on re-education and training, through awareness-raising actions, lectures or support for victims "and concludes:" This project is the result of a continuity work that has been developed jointly with national and international partners ".

Through EEAGrant, a financial mechanism that aims to reduce social and economic disparities in Europe, Project NO! will be financed under the Conciliation and Gender Equality Program, governed by the Regulatory Framework for the Financial Mechanism of the European Economic Area (MFEEE) 2014-2021. As the entity responsible for the promotion, the NO! counts on the Commission for Citizenship and Gender Equality (CIG).

Check the program and the speakers present at the launch event of the NO! Project