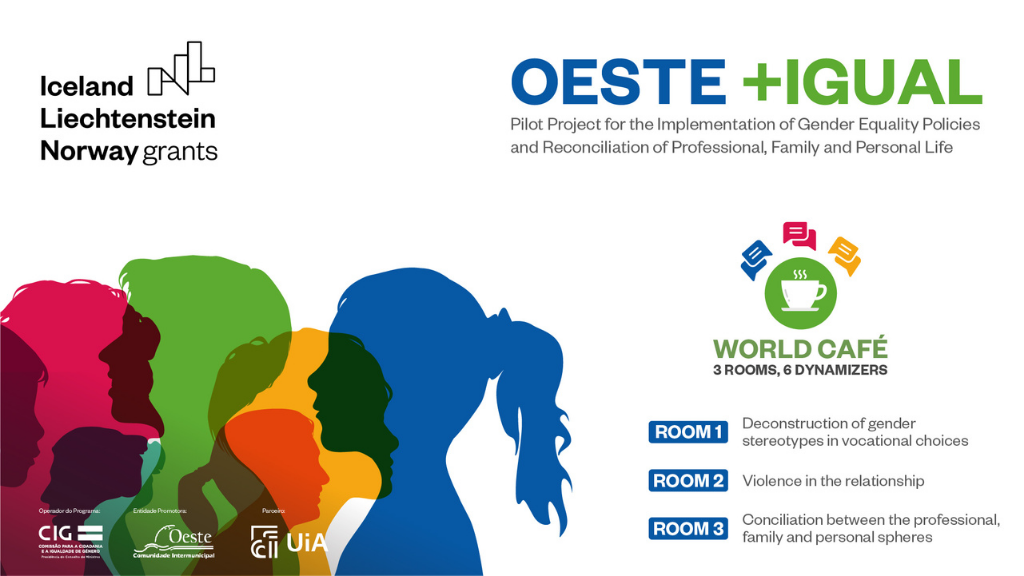 The second activity of the Oeste + Igual Project, World Café, took place on March 19, promoted by the Intermunicipal Community of the West, and subordinated to the themes of “Violence in Relationship”, “Deconstruction of Gender Stereotypes in Vocational Choices” and “Balance between the Professional, Family and Personal Spheres ”.

The opening session was led by Paulo Simões, Executive Secretary of the Intermunicipal Community of the West, followed by Susana Ramos, Coordinator EEA Grants Portugal National Focal Point, Sandra Ribeiro, President of the Commission for Citizenship and Gender Equality and Sónia Fertuzinhos, expert and Ph.D. student in Public Policies.

After the opening session, the forty participants were divided into small groups in three virtual rooms that functioned as a collaborative and informal space for brainstorming. Participants were able to give their contributions and opinions to relevant issues, identifying obstacles, reflecting on the themes, and suggesting ideas for the promotion of Gender Equality and Reconciling Professional, Family, and Personal Life in the West Region.

Through the sharing of the perceptions of each individual, it was intended to build a joint vision that contributes to the development of innovative strategies for real change in the West Region. At the end of each round, the groups moved to another room and worked on the ideas developed and recorded by the previous group in the room. In the end, everyone returned to the common room for conclusions.

The closing session was attended by Mónica Ferro, from the United Nations Population Fund, followed by Paulo Simões who thanked everyone for their presence and contribution.

Oeste + Igual is an Open Call # 5 project - Projects to promote equality between women and men at the local level, under the Work-life Balance Programme, operated by CIG and financed by the EEA Grants.